Multiple Miscarriage, Your Stories
August 19, 2012 by Our Stories
0

My first miscarriage happened 4 years ago.  I was 8 weeks along when I started bleeding.  I headed straight to the ER.  It was my first pregnancy and I was so scared and worried.  When they told us that we had miscarried, we were devastated.  It was one week before our wedding and we had already told everyone that we were pregnant.  Luckily we had the wedding to focus on, that’s what got us through the worst.

I was so scared that this was what we would be stuck with.

From the time I started my period (about age 11), I had known that I might not be able to have children.  Endometriosis is a problem that runs strongly in my mother’s family.  I have two aunts who were only able to conceive once and one aunt who couldn’t at all.  My mother was lucky enough to have her kids early, although she did have to have a couple of surgeries to even have me, her youngest.

So after that miscarriage I was terrified that I would never be able to carry a baby.   We started trying as again as soon as we could.  We have been blessed with two sweet boys in the past 4 four years.  I had some complications with pregnancies, nothing major, and both boys are perfectly healthy.

A few months ago we started trying for a 3rd (we still want a little girl).  We were so excited when we got pregnant right away.  Last weekend I started bleeding.  I was immediately concerned as I did bleed a little in each of my pregnancies.  As I started the second day of bleeding and it started to get heavier, I started worrying.  On the start of the third day I called into the doctor and spent the morning waiting to hear what I should do.

By this time, I was already pretty sure I was miscarrying.

Then I passed the baby.  It would have been much easier if I had not seen the baby, sac still intact come out.

It was again devastating.  Now I’m worrying again that perhaps my trouble is just starting.  My mother had her first two children easily, then had trouble conceiving the third. 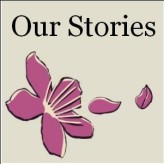 Collection of Community Submitted Stories. Author of each story is displayed at the end of the post. Want to share your story? Submit yours here.